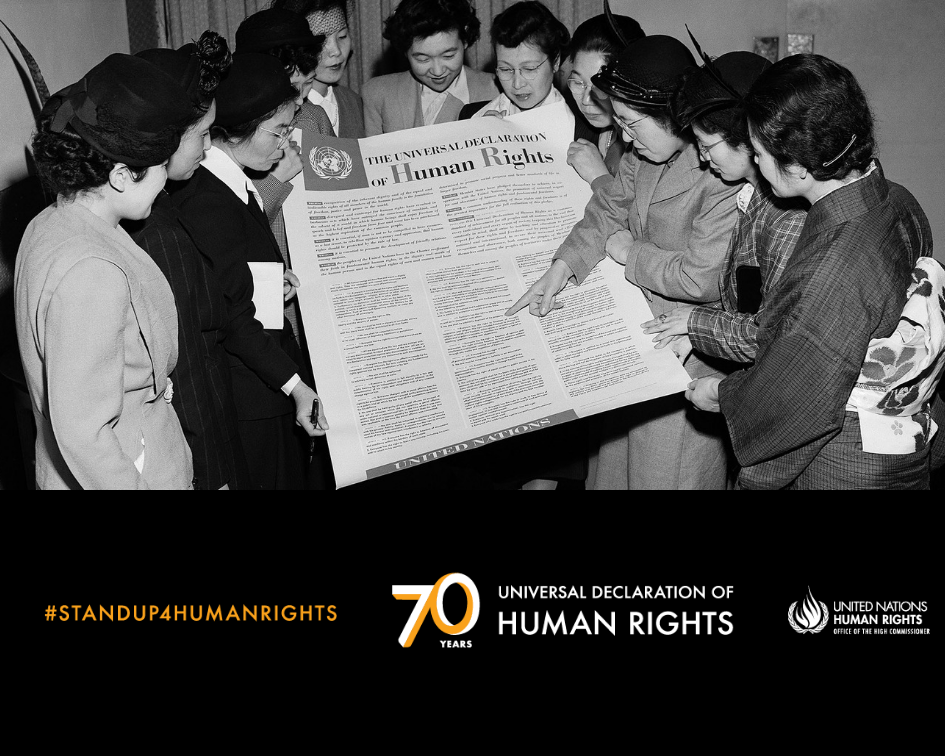 70th Anniversary of the Universal Declaration of Human Rights

If I think of the Universal Declaration of Human Rights, I picture a distinguished, elegant and beautiful woman in her 70th birthday. I imagine her smiling with a wrinkled face, with a clean but worn-out dress, tested by time and events.

She has a high-sounding name, but what does it mean to say that some rights are “universal”? I borrow Liz’s words, who said at the beginning of the internship “hay que reconocer que somos diferentes, intentar comprendernos y ver lo en que coincidimos”. In English this translates to “we must acknowledge that we are all different, try to understand each other and see what we have in common”, but the “coincidir” (so similar to “coincide”) struck me. Why can’t we start from there?

I think that when the Declaration was signed in 1948, the idea was exactly that in spite of all mistakes and dreads of the war, beauty cannot be ignored. It is that ancient beauty which sees dignity in each human being, not for the mere fact of being man or woman, citizen or slave, but for the simple reason of existing.

Despite challenges that seemed to be insurmountable, the Declaration was born. Due to the Cold War and the crumbling colonial system, the world seemed to be split, giving rise to many questions: what are our shared values? What do we identify with? But, most of all: who is the human being? The tireless job of many women and men in composing, negotiating and being stubborn made those 30 articles a reality and a reference point for human rights in decades to come, until now.

In the preamble the authors explained why it was necessary to put on paper those ideas, otherwise easily trampled on. In the articles that follow we find concepts such as freedom and dignity, together with individual rights, such as the right to life. The rights of the individual in a community are delineated, for example preserving him from being deprived of his nationality. The Declaration outlines constitutional freedoms, allowing for the freedom of thought, conscience and religion. Human beings are not complete if they are just kept under a glass bell protected from external interference; therefore, the Declaration also reflects the presence of the individual in a community, to bring out the possibilities of growth: in education as in work, in assistance in cases of vulnerability as well as in active participation in collective life. Rights and responsibilities are necessarily interconnected: the Declaration ends by acknowledging that the individual does not live alone and he must know how to live in society. Coexistence implies responsibilities.

One becomes overpowered when reading it. Then the questions arise: is it simply a fascinating document? A result of goodwill suffocated by reality? Is it worth celebrating the anniversary of the Declaration or is it just hypocrisy?

I am 23 and I belong to the so-called “crisis generation” and taking a metaphor from Don Milani, I relate to the idea of being living with my feet in the mud and the eyes looking up at the sky. The experience I had at the 39th session of the Human Rights Council has widened my horizons but certainly did not leave me dazed: not all those who enter Room XX do it with the same intentions, it is often difficult to put the human being at the centre and not hide behind excuses.

These are my feet anchored to the ground: sensitive to each crack, temperature and texture. Yet then my eyes look at the stars, and I see that the work and the tenacity of those like Eleanor Roosevelt in 1948 still continues through dialogue, statements and union of intent.
To really celebrate this 70th anniversary we need perhaps to leave the simplification and face the reality ourselves.

From small realities to great ones, the freedom of the individual – and the freedom of the state to refuse to cooperate – seems to be prevailing over that of the community. Then what Pope Francis calls the “culture of waste” finds fertile ground. Marginalization, refusal to understand and denial of embracing complexity arise. Such mechanisms are not only dangerous in the immediate future, but they become the foundations of inequality thus stepping back from that very beautiful and fragile idea of “universal” rights.
Universality is then ignored when some principles are ignored in the name of alleged cultural inconsistencies. For this reason, Niger can for example easily accept child marriage at the age of eight, because that is the tradition. Inviolabile sovereignty?

I instinctively reject this idea, but I also want to rationalize why this isolationist attitude is terribly dangerous. It is not just about pity for those girls in Niger, but also the conviction that the Vienna Declaration and the Action Program recognizing that human rights are universal, inalienable, indivisible and interdependent was not simply a word game. Not only do we need to give the same value to all rights, but we also need to start understanding that my rights have value only if other people’s rights are respected. Trenching oneself in a little corner of the world means renouncing to a necessary battle, but also limiting one’s freedom.
Easy? Quite the opposite, an integral approach is the effort of holding together the complexity of plurality with the need of one solution.

Lastly, it is not possible to gloss over the last two articles of the Declaration. A right is a question of justice, but it cannot be fully realised without responsibility.
I do want to celebrate the anniversary of the beautiful woman in her worn-out dress. I want to celebrate it here in Geneva, at Palais des Nations, with its immense garden, and the hooded Mont Blanc, accompanied by the thousands of faces I met during these three months.

To live in the world and at the same time not become contaminated: I believe it is possible.