Side Event – 40th session of the Human Rights Council The Convention on the rights of the child: Thirty years on – placing children’s rights at the heart of the policy agenda.

On the occasion of the 30th year of the adoption of the Convention on the rights of the child, there is a side event on placing children’s rights at the heart of the policy agenda. It was co-organized by the Special Representative of the UN Secretary-General on Violence against Children and the Government of Iceland at the Palais des Nations in Geneva on the 04th of March 2019.

The panel was composed of: 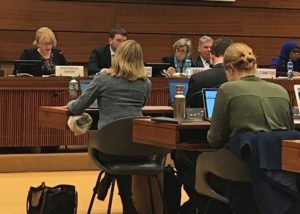 -Marta Santos Pais, Special Representative of the Secretary-General on Violence against Children;

-Bragi Gudbrandsson, Member of the Committee on the Rights of the Child;

-Khadija Juma, Save the Children;

-Ikponwosa Ero, UN Independent Expert on the enjoyment of human rights by persons with albinism.

Children are important, as citizen, as a future responsible member of society. This is the simple message of the Convention on the rights of the child (CRC) according to Marta Santos Pais, with her long years of experience in the defence of human rights.  Ásmundur Einar Daðason presented The Icelandic vision for the welfare of children by investing in their future. It requires several steps, including the approval of parliament to allow the implementation and regulation of the national agenda, the need for convergence of inter-ministerial policies and the participation of all stakeholders, including civil society. He stressed the importance of faith and determination in order to achieve high-impact actions. According to him, offering a happy childhood is the guarantee for an economically and socially successful society. The CRC member, Bragi Gudbrandsson, outlined the paradigm between universal engagement and the recognition of the place of children. He focused on the spread of Barnahus in Europe by balancing the two human rights principle of the “due process” and the “best interest of the child”. Initially it was implemented in 1998 by Iceland. Then, this project has been replicated by other Nordic countries. However, the main obstacle is the fear of children to report because less than 1% of victims benefit from support services like this one. That’s why, multidisciplinary response to children’s protection is useful. Khadija Juma shared her experience on fight against violence in Zanzibar since 1986 by providing medical, legal and psychological support. Physical violence affects both girls and women and is located at home, in school or between the two. So, this project addresses the lack of coordination and fragmentation of services available to victims. The Independent Expert Ikponwosa Ero, points out that the theme of Emerging forms of violence on children, particularly harmful practices related to belief in witchcraft and how it affects children with albinism. His intervention highlighted the situation of children around the world. For example, 40% of cases are perceived as related to witchcraft. After reviewing the normative frameworks of the situation, the expert mentioned the harmful practices related to certain expressions of belief in witchcraft and the need to separate belief from expression.

In conclusion, this side-event reflected the legal framework and best practice for ensuring children’s freedom from violence. It was also an opportunity for countries to discuss their respective protection systems and initiatives in order to promote global actions in line with the 2030 agenda.