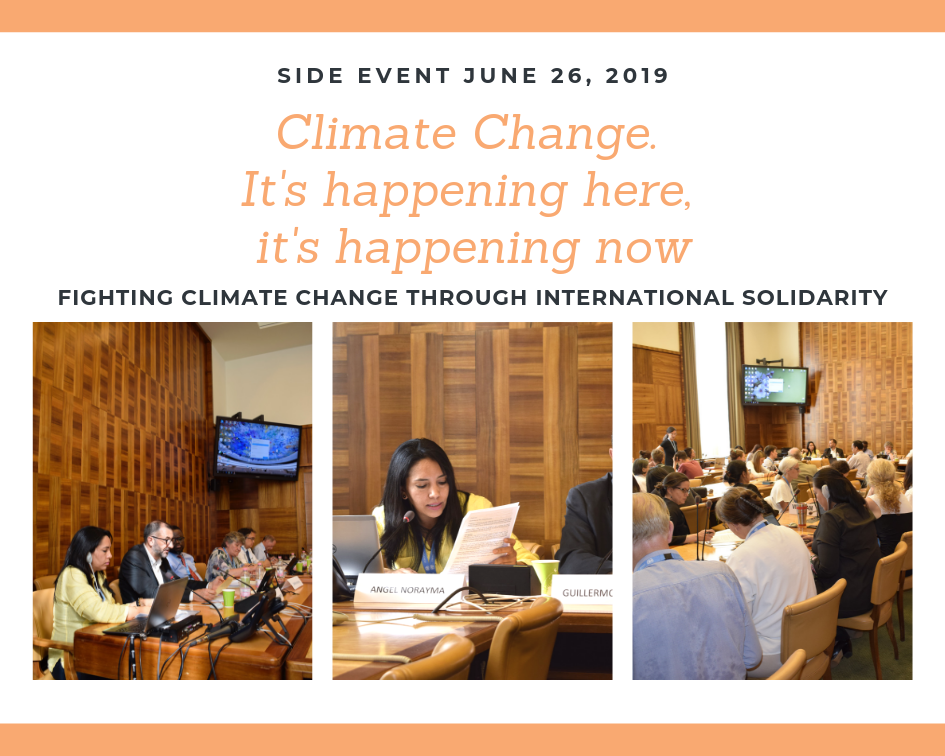 IIMA and VIDES International had the pleasure to be co-organizers of the side event “Climate Change: It is happening here, it is happening now”, that took place on June 26, 2019, during the 41st Session of the Human Rights Council (HRC), organized by the Permanent Mission of the Philippines and the Associazione Papa Giovani XXIII (APGXXIII) .

Ms.  Norayma Angel, IIMA representative and currently the Coordinator of the Office of Human Rights of the Apostolic Vicariate of Puerto Ayacucho in Amazonas, Venezuela, shared about her experience of working in the Amazon of Venezuela where she helped carry out a social environmental diagnosis. This study was published in 2017 and it was part of the work implemented by the Network of Indigenous Defenders of Human and Environmental Rights. One of the key findings of the study refers to the challenges and obstacles faced by indigenous people whenever they try to access natural resources. The Network of Human and Environmental Defenders is made up of different groups of volunteers and included those working for indigenous rights as well as environmental rights. They come from many indigenous nations and organizations. A common thread is an  ambition to protect and defend the culture and territories of Indigenous people. The list of problems identified in the diagnostic was many and included water contamination, loss of biodiversity, the emergence of illnesses and diseases previously eradicated and a health system without human and financial resources. In terms of cultural rights, they identified problems such as the minimization of the importance of the ancestral culture in particular regarding practices that call for environmental protection. There were also problems relating to deficient urban planning and irresponsible logging. In relation to indigenous rights, they found that legal titles to the ancestral property were no longer recognized and that indigenous territories are occupied by paramilitary groups such as the guerillas and illegal miners. The complexity of the situation and its multifaceted nature makes it difficult to analyze and understand the long-term consequences of the current social conflict.